I wanted to alert readers of this blog that we've started up a somewhat less whimsical blog called "BOGO Baby" at savings.twinpanic.com. It's going to be (mostly Christina) posting about saving money with twins (although we hope it will be more generally applicable).
Posted by Jon Grantham at 1:26 PM No comments:

What Do You Do with All Your Free Time? 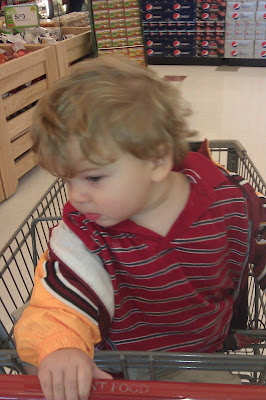 This post begins a new emphasis for twinpanic.com. Looking at my hit statistics, I see that readership is close to non-existent for my collection of fun facts about twins. (Unless I mention the twins from "Raising Hope" -- oh look, see what I did there?) So from now on, I'm going to make this blog more about personal stories of life with twins. That way, even if I don't expand this blog's reach, I will connect more directly with its readers.

One of the running jokes Christina and I have is to ask parents with one child, "What do you do with all your free time?" They always laugh, because compared to being kid-free, having one child seems like a lot of work.

On Monday of last week, Salem was admitted to Children's Hospital with a diagnosis of Kawasaki disease. Christina stayed with him in the hospital, so for the next two days my primary responsibility was taking care of Jack at home. (Except for the visits to the hospital.)

Now, Kawasaki disease itself is an excellent reason for panic and will undoubtedly be the topic for future posts. (Spoiler alert: Salem's recovering, and it looks like he'll be fine.) But it also gave me the opportunity to contemplate life with a singleton.

The first thing that I noticed is that, yes, it really is a lot easier. When Jack needed my attention, I could give it to him undivided, without having to keep one eye on Salem to make sure he didn't get into bigger trouble. When I undid the baby gate and picked up Jack, I didn't have to figure out how to close it again immediately while keeping a firm hold on a wiggling child. As a bonus, we have twice as much gear as we need. If one high chair was dirty, there was a chance the other one was still clean.

Want to take Jack out to the swing set in the back yard? Pick him up and go. No struggling with a double stroller or waiting until a second pair of hands was available. Tuesday morning, I desperately needed to re-stock the groceries (even before the hospitalization, taking care of what had been diagnosed as an ear infection in Salem was chewing up a lot of our spare time). So I put Jack in the car and drove to the store.

If you have one kid, that may not seem exceptional to you. If you have two kids of varied ages, you probably do this all the time. If you have twins, here are your options:
It was also easier to move about this store without shoppers gawking at the twins. Jack did receive some attention -- he is a cutie, after all -- but not nearly the level (or even half that) he would have gotten accompanied by his brother.

So other than grocery shopping, what did I do with my free time? Laundry. Lots of it. Along with moving, the change in seasons and other factors caused clothes to pile up in diverse locations of the house. I finally had time to sort through it and do most of it. I even got to wash the kimono I had picked up in Japan in December 2009.

Salem's been home almost a week now, and the experience of taking care of one kid at a time is being replaced by, "Why are you taking your brother's food? It's exactly the same as the food in front of you." And the laundry is piling up again. Thank goodness.