How I Learned to Stop Worrying and Love the Crowds 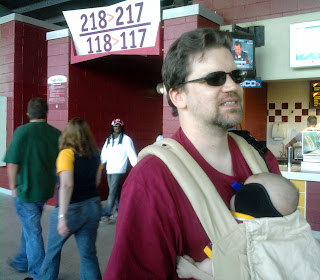 In one of my earliest posts to this site, I said


"Oh, no, people will be coming up to me to say stupid things in a grocery store. I've structured much of my life around not having to talk to strangers."

As the boys' birth approached, taking them out in public continued to be a minor fear of mine.  After three months and a week of twin parenthood, I can say that dealing with their admirers when we go out is...not bad.

I still haven't taken them to the grocery store -- we've been trying to keep them healthy by limiting their interactions with potentially sick members of the unwashed masses.  But we've found some outdoor venues where we don't have to worry about recirculated air, and now that they've made it to the three-month mark, we're beginning to be bolder with taking them out.  To my surprise, I find myself enjoying the reactions of strangers.

Part of it is probably that, at a deep-seated level, we almost all enjoy getting compliments, whether for ourselves or our children.  "Wow, you're really brave to handle taking both of them out."  "What cute babies!"  Part of it is that so far, we've avoided any epically stupid questions.  (The most common one remains, "Are those twins?" followed by, "A boy and a girl?")

But mostly it's just nice to get out of the house.  People assume that it must be a lot of work dragging these two around in public.  They're right.  But, as Christina pointed out to me after a successful trip to the Redskins game, so is staying home with them.  At least when we're out, we get credit for it.
Posted by Jon Grantham at 10:30 AM

Email ThisBlogThis!Share to TwitterShare to FacebookShare to Pinterest
Labels: personal