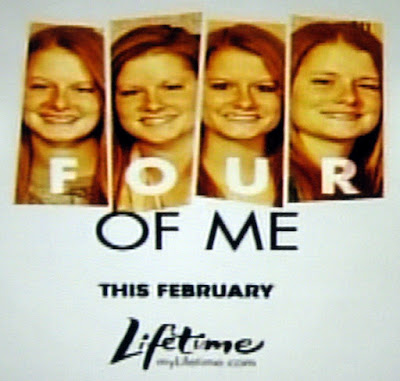 I recently saw an ad for an upcoming series on Lifetime, "Four of Me". The announcer informs us that the chance of getting struck by lightning is 1 in 6,000, while the chance of having identical quadruplets is 1 in 100,000,000. Then the words, "Which Would You Choose?" flash on the screen.

Now, the name of the website is twinpanic.com, so I try to keep things triplet- and quad-free around here (mostly).  So let me share my reaction, as a parent of identical twins, to this ad.  First of all, you mean I could have two more like the ones we already have?  Yes, please!  Secondly, wait, they're offering injury and possibly death as an alternative?  Isn't that a bit offensive/drastic?

The show follows the lives of the 17-year-old Durst quadruplets.  The web is not exactly awash with information on the show, though you can find out that they shot an episode in Las Vegas recently.  If you're looking for earlier video, you're more in luck.  Here you can see them in 1998 on "Maury".  Here they are in 2000 and again in 2007 on the "Today Show".  Here's a "Tonight Show" clip from around 1999.  Hopefully they've developed more interesting schtick than all talking at the same time.

Of course, I'm going to watch the show, but I don't have high hopes.  Reality TV isn't known for bringing out the best in its subjects, and the show's title speaks to a common problem of taking "identical" too literally.  But, c'mon, identical quadruplets -- who doesn't want to see how that turns out?
Posted by Jon Grantham at 11:27 PM